In CRT technology, good monitor design begins with the CRT because electronics cannot compensate adequately for a poorly-designed tube. Therefore, to describe a CRT monitor, you have to describe the CRT. 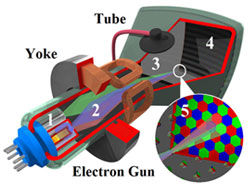 In a typical colour CRT, the electrons are generated by multiple electron guns (typically three producing the primary colours of RED, GREEN and BLUE) located in the narrow end (neck) of the CRT (see 1 in the diagram to the left). The source of the electrons is an oxide coated element called the cathode. The cathode must be heated to produce the required stream of electrons (negatively charged) that are then attracted to the screen — which is positively charged. The yoke — a coil that is mounted on the tube’s neck — is synchronized with the video input signal (from the computer) and is responsible for the synchronized horizontal and vertical movement of the image on the screen (2).

The CRT, like a light bulb, requires a vacuum to work. The typical vacuum pressure on a CRT is 14 pounds per inch or about 5,000 lbs. of total pressure being exerted on the tube from the outside. This is why the CRT has to be built with thick, strong glass (3). Moreover, this is one of the reasons why a CRT monitor is so heavy in relation to its size.

The screen of the CRT is where the final transformation takes place and where the image shows up (4). The image is created by causing the phosphor coating on the inside of the face of the CRT glow when bombarded by electrons — in other words, they fluoresce (much like a fluorescent tube). The beam of electrons passes through a perforated mask that allows the appropriate phosphors (that create colour) to be struck 20-30% while absorbing the rest as heat. The perforated mask became known as the shadow mask. Overall, four types were created by various manufacturers in accordance to their design: delta, in line, slotted, and strip . all ultimately performing the same function. All of these shadow mask types still had limitations, such as with the geometry and colour uniformity, and which led to the introduction of the Trinitron tube in 1968 by Sony of Japan for use in colour TVs and later on for monitors. The Trinitron monitor also improved the CRT's design by using just one electron lens (for improved accuracy), an improved tube face (to reflect more ambient light), and the phosphors were applied as vertical stripes rather than dots (reducing the pixel pitch on the screen substantially). These qualities earned Sony Trinitron technology an esteemed reputation as the best-quality CRT monitor.

Research and insights written by Megatech,
as featured in the MIS White Papers, Oct. 2010.