Is the Beauty of a Curve Decisive for Colour Reproduction? Learning About LCD Monitor Gamma

Problems like extremely poor display of shadow areas, blown-out highlights, or images prepared on Macs appearing too dark on Windows computers are often due to gamma characteristics.

In this session, we'll discuss gamma, which has a significant impact on color reproduction on LCD monitors. Understanding gamma is useful in both color management and product selection. Users who value picture quality are advised to check this information.

Below is the translation from the Japanese of the ITmedia article "Is the Beauty of a Curve Decisive for Color Reproduction? Learning About LCD Monitor Gamma" published July 13, 2009. Copyright 2011 ITmedia Inc. All Rights Reserved.

Just what is monitor gamma?

The term gamma comes from the third letter of the Greek alphabet, written Γ in upper case and γ in lower case. The word gamma occurs often in everyday life, in terms like gamma rays, the star called Gamma Velorum, and gamma-GTP. In computer image processing, the term generally refers to the brightness of intermediate tones (gray).

Let's discuss gamma in a little more detail. In a PC environment, the hardware used when working with color includes monitors, printers, and scanners. When using these devices connected to a PC, we input and output color information to and from each device. Since each device has its own unique color handling characteristics (or tendencies), color information cannot be output exactly as input. The color handling characteristics that arise in input and output are known as gamma characteristics.

While certain monitors are also compatible with color handling at 10 bits per RGB color (210 = 1024 tones), or 1024 x 3 (approximately 1,064,330,000 colors), operating system and application support for such monitors has lagged. Currently, some 16.77 million colors, with eight bits per RGB color, is the standard color environment for PC monitors. Ordinarily, the nature of monitor gamma is such that intermediate tones tend to appear dark. Efforts seek to promote accurate exchange of color information by inputting data signals in which the intermediate tones have already been brightened to approach an input:output balance of 1:1. Balancing color information to match device gamma characteristics in this way is called gamma correction. 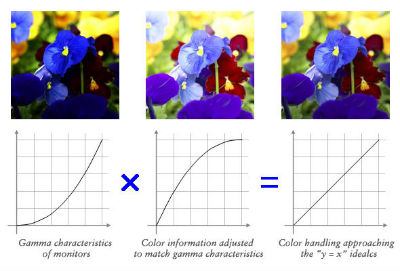 A simple gamma correction system. If we account for monitor gamma characteristics and input color information with gamma values adjusted accordingly (i.e., color information with intermediate tones brightened), color handling approaches the y = x ideal. Since gamma correction generally occurs automatically, users usually obtain correct color handling on a PC monitor without much effort. However, the precision of gamma correction varies from manufacturer to manufacturer and from product to product (see below for details).

The gamma relationship between the operating system and the LCD monitor

The standard monitor gamma value for the Mac OS is 1.8. The same concept applies as in Windows. We can obtain color reproduction approaching the ideal by connecting a Mac to a monitor configured with a gamma value of 1.8.

An example of the same image displayed at gamma values of 2.2 (photo at left) and 1.8 (photo at right). At a gamma value of 1.8, the overall image appears brighter. The LCD monitor used is EIZO's 20-inch wide-screen EV2023W FlexScan model (ITmedia site).

To equalize color handling in mixed Windows and Mac environments, it's a good idea to standardize the gamma values between the two operating systems. Changing the gamma value for the Mac OS is easy; but Windows provides no such standard feature. Since Windows users perform color adjustments through the graphics card driver or separate color-adjustment software, changing the gamma value can be an unexpectedly complex task. If the monitor used in a Windows environment offers a feature for adjusting gamma values, obtaining more accurate results will likely be easier.

If we know that a certain image was created in a Mac OS environment with a gamma value of 1.8, or if an image received from a Mac user appears unnaturally dark, changing the monitor gamma setting to 1.8 should show the image with the colors intended by the creator.

Eizo Nanao's LCD monitors allow users to configure the gamma value from the OSD menu, making this procedure easy. In addition to the initially configured gamma value of 2.2., one can choose from multiple settings, including the Mac OS standard of 1.8.

To digress slightly, standard gamma values differ between Windows and Mac OS for reasons related to the design concepts and histories of the two operating systems. Windows adopted a gamma value corresponding to television (2.2), while the Mac OS adopted a gamma value corresponding to commercial printers (1.8). The Mac OS has a long history of association with commercial printing and desktop publishing applications, for which 1.8 remains the basic gamma value, even now. On the other hand, a gamma value of 2.2 is standard in the sRGB color space, the standard for the Internet and for digital content generally, and for Adobe RGB, the use of which has expanded for wide-gamut printing,.

Given the proliferating use of color spaces like sRGB and Adobe RGB, plans call for the latest Mac OS scheduled for release by Apple Computer in September 2009, Mac OS X 10.6 Snow Leopard, to switch from a default gamma value of 1.8 to 2.2. A gamma value of 2.2 is expected to become the future mainstream for Macs.

On the preceding page, we mentioned that the standard gamma value in a Windows environment is 2.2 and that many LCD monitors can be adjusted to a gamma value of 2.2. However, due to the individual tendencies of LCD monitors (or the LCD panels installed in them), it's hard to graph a smooth gamma curve of 2.2.

Traditionally, LCD panels have featured S-shaped gamma curves, with ups and downs here and there and curves that diverge by RGB color. This phenomenon is particularly marked for dark and light tones, often appearing to the eye of the user as tone jumps, color deviations, and color breakdown.

An internal gamma correction feature applies multi-gradation to colors and reallocates them. While the input from a PC to an LCD monitor is in the form of color information at eight bits per RGB color, within the LCD monitor, multi-gradation is applied to increase this to 10 bits (approximately 1,064,330,000 colors) or 12 bits (approximately 68 billion colors). The optimal color at eight bits per RGB color (approximately 16.77 million colors) is identified by referring to the LUT and displayed on screen. This corrects irregularity in the gamma curve and deviations in each RGB color, causing the output on screen to approach the ideal of y = x γ.

Let's look at a little more information on the LUT. The LUT is a table containing the results of certain calculations performed in advance. The results for certain calculations can be obtained simply by referring to the LUT, without actually performing the calculations. This accelerates processing and reduces the load on a system. The LUT in an LCD monitor identifies the optimal eight-bit RGB colors from multi-gradation color data of 10 or more bits.

An overview of an internal gamma correction feature. Eight-bit RGB color information input from the PC is subjected to multi-gradation to 10 or more bits. This is then remapped to the optimal eight-bit RGB tone by referring to the LUT. Following internal gamma correction, the results approach the ideal gamma curve, dramatically improving on screen gradation and color reproduction.

Eizo Nanao's LCD monitors proactively employ internal gamma correction features. In models designed especially for high picture quality and in some models in the ColorEdge series designed for color management, eight-bit RGB input signals from the PC are subjected to multi-gradation, and calculations are performed at 14 or 16 bits. A key reason for performing calculations at bit counts higher than the LUT bit count is to improve gradation still further, particularly the reproduction of darker tones. Users seeking high-quality color reproduction should probably choose a monitor model like this one.

Checking the gamma value of an LCD monitor 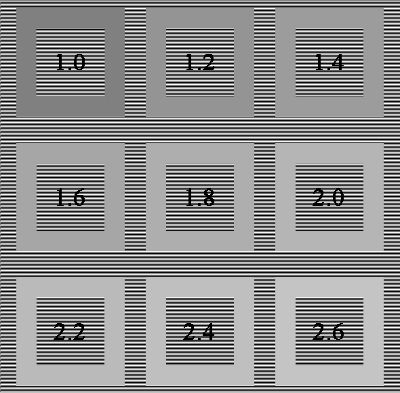 In conclusion, we've prepared image patterns that make it easy to check the gamma values of an LCD monitor, based on this session's discussion. Looking directly at your LCD monitor, move back slightly from the screen and gaze at the following images with your eyes half-closed. Visually compare the square outlines and the stripes around them, looking for patterns that appear to have the same tone of gray (brightness). The pattern for which the square frame and the striped pattern around it appear closest in brightness represents the rough gamma value to which the monitor is currently configured.