How an OLED Creates Light 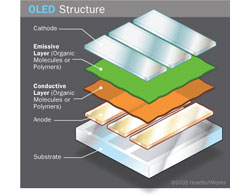 How is it that such a small and delicate device can emit light on the scale of an LCD - a device far larger in size?

There are three major steps involved in producing light (see figure to the right):

The colour of light is dependent on the type of organic molecule in the emissive layer (several types of organic films are placed on the same OLED to make colour displays). The intensity of brightness increases by applying more current through the device.

Research and insights written by Megatech,
as featured in the MIS White Papers, Jan. 2011.