An acronym for Liquid Crystal Display, an LCD is a thin, flat electronic visual display that ...

uses the light-modulating properties of liquid crystals (LCs) to provide images on a screen. This is good for a short answer; however, the LCD is a quite interesting invention that has built for itself a long and rich history.

See EIZO’s EIZO Colour Handbook: Chapter 3 for a brief yet vivid and illustrative summary on the principles of LCD monitors.

LCD Technology is Only 122 Years Old

The liquid crystal is the driving force of the LCD, and its discovery goes well back to 1888. Considered more of a random occurrence while examining the properties of cholesterol in carrots, Austrian botanist – Fredreich Rheinizer – happened across a fourth, liquid crystal state of matter.

For the next 80 years, liquid crystals remained a pure scientific curiosity. Nevertheless, over this time, other key qualities were discovered. For one, an LC could be controlled by either a magnetic or electric field in such a way as to change its orientation. Second, an LC was able to allow the transmission of light through it. And third, it was capable of twisting that light. The most popular liquid crystal phase, due to its use in LCD technology, is known as nematic. Derived from the Greek word nema for thread, nematic LCs align in a thread-like format when an electromagnetic field is applied. 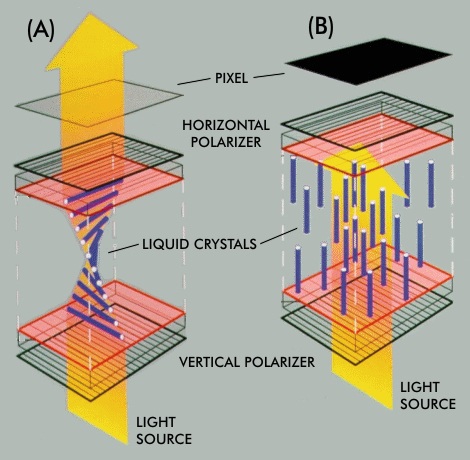 It wasn’t until the 1960s that massive breakthroughs began to take place towards the development of the LCD. For starters, no one could make an LC molecule with the right characteristics to guarantee a commercial and reliable display device. In the early 1960s, a way was found to stabilize the LC at room temperature. And in the late in the same decade, the twisted nematic (TN) was developed — a nematic liquid crystal naturally twisted 90 degrees, much like a quarter helix. The TN is critical for the function of an LCD – by adjusting the amount of electric current, the LC will untwist, thereby changing the angle of the light passing through it, thus allowing more or less light through (see diagram to the right).

The first LCDs produced employed passive-matrix (PM) technology and became popular in the early 1970s in such applications as digital watches and calculators. PM worked by using one transistor for each column (i.e., x5) and one for each row (i.e., y4) . switched on in sequence to activate a particular pixel on the screen (see the figure to the left). The problem with PM was that as the number of pixels increased on the screen, this led to a slower response time and poor image quality. Moreover, for colour capability, the technology was very limited in the number of colours displayed (i.e., 16 colours).

Quick Fact: Since liquid crystals are highly sensitive to temperature, they are used to make such common products as thermometers and mood rings.

By the early 1980s, PM-LCDs were being used in electronic typewriters and personal word processors. However, by the mid-1980s, PM-LCDs were being realized as ill-suited as the screen size increased. An improvement came in the form of supertwisted-nematic (STN) LCDs that improved the picture quality, viewing angles and contrast, which made the technology well-suited for use in laptops and word processors. Nonetheless, STN still had visibility problems, resulting in double supertwisted-nematic (D-STN) being developed in 1987. D-STN required the overlaying of two liquid crystal layers to solve the problem, thereby increasing the weight, thickness and cost of the screen. Triple supertwisted-nematic (T-STN) further improved the LCD, but with added weight, thickness and cost. Passive-matrix use in monitor screens was the norm up until the early-1990s when active-matrix (AM) LCDs emerged as a superior display.

The active-matrix LCD (AM) differs from PM technology such that each pixel has its own transistor — known as a thin film transistor (TFT) (see figure to the right). The TFT setup allows for improved brightness, higher contrast, better image quality and faster response time over that of PM technology. However, an AM-LCD requires a substantial number of transistors to operate. For instance, take a monitor that allows a resolution of 1600 x 1200: multiplying 1,600 columns by 1,200 rows by 3 colour subpixels yields a requirement of 5.76 million transistors. When an LCD is said to have a 'bad pixel', this refers to a defective transistor on the display which, as you can imagine, would be a virtually impossible feat to fix. You can also imagine how this would have a huge impact on the size of the screen as well. By increasing the screen size, the number of pixels and transistors increases, thus raising the chance for bad pixels. This makes it clear why the market for larger LCD monitors has progressed so slowly over the past few years — from the 15" LCD standard in the early 2000s, to the 17" in the mid-2000s and presently pushing towards the 22"-24" range.

TFTs were first developed in the United States during the 1960s, and it was later in that decade that such companies as RCA Labs and Westinghouse came up with the idea for using TFTs in displays and laid the foundations for today's AM-LCD technology. While these U.S. companies were the pioneers in the field, they ended up walking away from the technology, and instead, placing their bets on passive matrix. It was the Japanese that took AM technology to the next level... 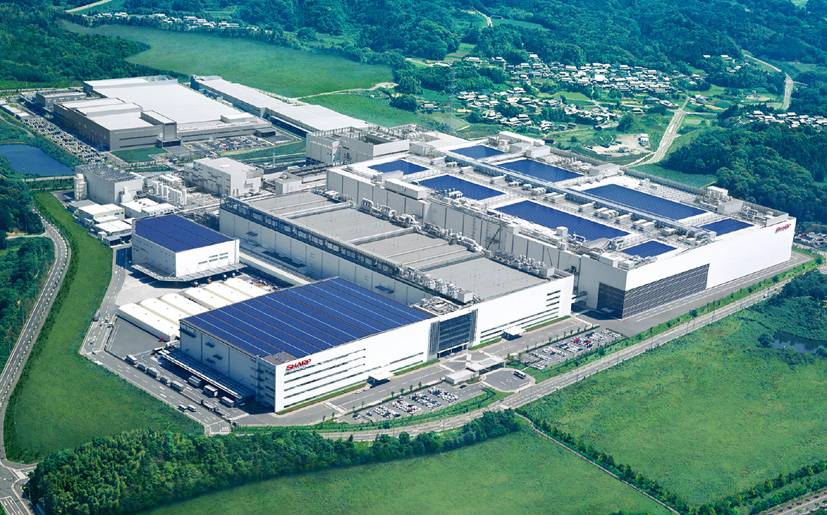 It was during the 1970s and 1980s that Japanese manufacturers such as Sharp, Toshiba, Sanyo and Matsushita picked up development on the AM-LCD from their U.S. counterparts. They began planning record investments in AM-LCD production capabilities. As a rule of thumb, in order to construct a state-of-the-art AM manufacturing facility, atleast US$500 million of initial investment was required, followed by a period of additional investments to develop a reliable manufacturing process. For instance, in 1992, Sharp announced multi-year spending of $1.32 billion, Toshiba — $1.06 billion, Sanyo — $597.15 million, and Matsushita — $464.45 million. A key development in Japan that lent a huge hand to the large investment plans for these manufacturers was that LCD component producers (such as glass manufacturers) were extremely reactive to the production plans for the LCD, and made large capital investments of their own in league with the LCD producers.

The Revolution Spreads Across Eastern Asia 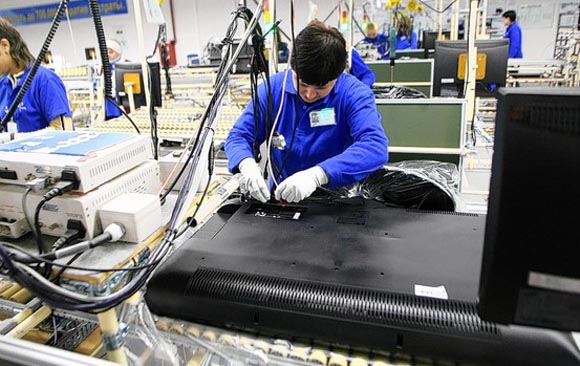 By 1995, the LCDs (both AM and PM) accounted for approximately 87% of the total flat panel display market. Of this market, the Japanese dominated with a 90% world market share due to their massive investments in AM-LCD technology. Throughout the late 1990s, a number of other East Asian countries began entering the race for AM-LCD production . particularly, South Korea and Taiwan. South Korea was interested as a means to replace the CRT but also given that the LCD manufacturing process could easily take advantage of semiconductor manufacturing infrastructure currently in place, thereby reducing investment spending substantially. Taiwanese companies already had the largest worldwide share for CRT monitors and, as such, they were interested in getting 'with the times'. In South Korea, the key players were Samsung, LG, Hyundai and Daewoo which formed a consortium (chaebol) in the late 1980s. Through the early 1990s, these companies were setting up R&D laboratories to develop AM-LCD technology on their own, and by the mid-1990s, were churning out small-sized screens (i.e., 6"-10"). Some of these companies, such as Samsung for instance, which was already heavily involved in the manufacturing of semiconductors, were able to reduce LCD manufacturing costs by using existing semiconductor fabricating facilities.

How are the Semiconductor and LCD Manufacturing Processes Similar?

The LCD manufacturing process is very similar to that of semiconductor production. The only major difference is that the TFT process involves glass substrates whereas the semiconductor process involves silicon wafers. In the semiconductor industry, the pressure to reduce costs and increase productivity has led manufacturers to increase the size of wafers and reducing the size of chips so that more chips can be produced per wafer. Doing so has increased yield by reducing the number of defects per wafer. The same has been applied to LCD manufacturing. However, there is one major difference. As time progresses, the screen size for LCDs gradually gets larger whereas semiconductor wafers get smaller. 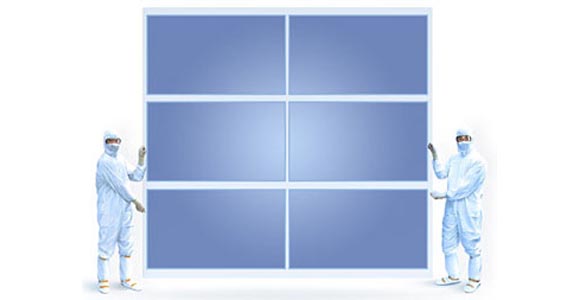 Since the 1990s, the cost of production for LCDs has dropped substantially. This has been achieved by increasing the number of panels per substrate. This requires that the substrates be increased in size in order to increase the number of LCD panels that are produced, and hence, increased yield. As the need for larger LCD panels has increased, so has the need for newer generations of manufacturing equipment. Thus far, LCD manufacturing has gone through 10 such generations. For example, while 7th generation can handle 40” screens, 8th generation can provide the capability of producing 50” screens, and 10th generation can reach as high as 65”.

Still, throughout this time, the LCD was still more costly to manufacture compared with the CRT – this was particularly the case given the high defect rate during the manufacturing process. For instance, in the mid-1990s, the cost of a 20" NEC LCD was approximately US$8,000. Compare this with a comparable 20" Sony CRT monitor at $2,300. Moreover, the CRT maintained its market position through innovations of its own, such as HD, increased screen size, flat face, superb display quality and an unbeatable cost-performance ratio. This price differential gradually eroded until the manufacturing cost of an LCD matched that of a CRT in the mid-2000s.

...And Forward to the Future

The LCD has quickly gained dominance as the display technology of choice over the past few years to the point where it has become rare to find CRT monitors in use anywhere. The new display technology that has started to emerge on the scene is OLED (Organic Light Emitting Diode).

Research and insights written by Megatech, as featured in the MIS White Papers, Nov. 2010.